A year ago, I released Fireworks at Midnight, thinking I would leave the world of A Witch’s Night Out forever (I’d planned the series as a trilogy). Unfortunately, my characters had other plans. Since I’d sicced Madame Eve on her cat familiar, earth mage Shelley Dupree insisted I make things right. To be fair, I’d already given her a magical handicap, forced her under house arrest, and buried her in bills—taking away her feline companion did seem a cruel and unusual punishment.
It took me two months of fictional time to even the scales with Feline Valentine.  Part of Decadent Publishing’s 1Night Stand series, my interracial paranormal romance is set in Washington, D.C., where magic-wielding folk try to live alongside us pesky humans. It’s my first true “shifter” AND “foodie” romance (talk about ticking two boxes with one book), and a quick read of the blurb should tell you what I mean. 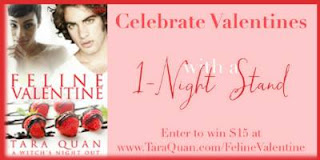 To celebrate this unexpected return to my favorite series, I’m giving away a $15 gift card. To enter, leave a comment here and drop your details at my website: http://www.taraquan.com/felinevalentine. 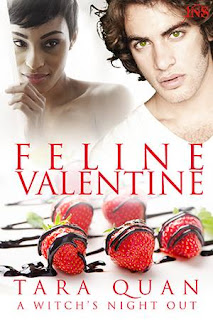 Excerpts, in increasing order of heat level, from PG to R-Rated

Excerpt 1 (PG)
Her doorbell rang.
An ominous crack followed the box’s impact with her yellowed kitchen floor. Sweat dampened the back of her neck. She must have imagined the sound. Her doorbell had been broken for weeks—months even. She’d taped a scribbled sign telling food delivery people to leave items on the porch. No one other than her family ever visited.
Everything, including the array of curiosities in front of her, must be part of a hallucination brought on by prolonged celibacy. Sweets wouldn’t dare sic Madame Eve’s service on her. Everyone Shelley knew who’d used it had—
Ding dong.
Okay, she could fix this. She’d meet the guy and tell him to scram. No way could the matchmaker’s mojo work in less than five seconds.
Muttering curses under her breath, she marched past the counter, through her makeshift office, and across the small living space, to stop in front of the thick wood barrier. Peepholes hadn’t been in vogue back when this place had been built. Since she hadn’t bothered to switch out the bulbs after the porch lights died, she couldn’t have discerned more than shadowy shapes regardless.
Pulling her shoulders back, she summoned her inner bitch. She had to run the guy off. Failure would end in disaster. Acting rude and obnoxious was a matter of determination, persistence, and effort.
She swung the door open.
The warlock next door stared back at her.
Her next breath erupted as a cough. “F—udge cakes.”
As opening lines to Shelley Channeling the Shrew went, she could have done better. She blamed her parents. No matter how many times she’d thought, read, and heard four-letter expletives, she couldn’t shake the ingrained childhood habit of modifying them for polite company.
It didn’t help that the man had a brown cake box sandwiched between his waist and left arm. Responding to the stimuli, her stomach had short-circuited her brain and demanded sustenance—ideally, in the form of fudge cake. Her gaze dropped to the bottle clasped in his hand. She’d had a champagne craving since this morning.
Her hunky neighbor’s green eyes had widened to a comical degree. Perspiration beaded his forehead. His Adam’s apple bobbed up and down. When his mouth opened, no sound came out.
What did he have to be shocked about?
Of course, only now did it occur to her she could have pretended not to be home. Just because someone rang the doorbell didn’t mean she had to answer.
It would be so rude not to, her goody-two-shoes inner voice who sounded suspiciously like her mother countered. I raised you better.
As she contemplated slamming the door, an act that met with immeasurable resistance from the metaphorical angel on her shoulder, her neighbor croaked, “It’s you.”
As first exchanges between potential soul mates went, this might be one for the books.
At least the guy came with more than one bribe. A covered plate of chocolate-dipped strawberries balanced precariously on his other palm. Her gaze drifted over his bare forearm and along tensed biceps. The short sleeve of his red T-shirt accentuated his muscle definition.
Her mouth watered. Her gluttonous heart did a little flip. She couldn’t settle on what tempted her more—the food or the warlock.

Excerpt 2 (PG-ish)
Adrien finished slotting the tray of chocolate-dipped strawberries into the case’s most prominent spot. In honor of Valentine’s Day, he’d drawn a Cupid’s bow on each fruit using melted white chocolate. Beaming a proud smile at the appetizing array, he made a mental note to drop off any remainders on his next-door neighbor’s porch after closing time.
With the notion came a sudden compulsion to also send a bottle of bubbly. Rolling his shoulders to relieve the tension in his fatigued muscles, he tentatively added champagne to the shopping list. If today’s profits met expectations, he should be able to gift the old lady some booze.
Less than a second later, an image of a bottle of peach Schnapps flashed over his vision. Stepping to his left, he took off the wool hat and placed it next to the cash register. Why was his brain fixating on ingredients for a Bellini? He didn’t even like cocktails.
White heat flashed over his vision. He found himself on his knees, crouched over a soft feminine body. Fizzy, bubbly liquid slicked skin the color of caramel. When her back arched, the drink sluiced over a set of tensed, quivering abs to soak her lacy pink waistband. He dipped his head, his tongue trailing over the potent mixture of peach, alcohol, and woman. He dug his fingers into her lush hips, tilting her in the opposite direction so the remaining liquid trickled over her ribs to catch along the underwire of her bra. Capitalizing on the excuse to taste, he—
Fingers snapped repeatedly in front of his face. “Oy. Where the hell did you go?”
With a sigh, he directed his gaze at his sibling. “Bass, what the hell do you want?” Their two-year age gap allowed for a healthy dose of fraternal bonding, but a lifetime as the man’s big brother had also built up baseline cynicism. Sebastien’s unannounced visits tended to have odd and oftentimes very expensive consequences.

Excerpt 3 (R-Rated)
“Stop hogging the binoculars. It’s my turn to ogle the warlock next door.”
Ignoring the high-pitched whine, Shelley Dupree zoomed in on a pair of sweat-slicked pecs. A prolonged spying session on her new neighbor seemed the perfect cure for Valentine’s Day doldrums. Though Dulcina, her best friend and cat familiar, could turn into an absolute pest when thwarted, the reward for tuning out her incessant requests superseded all risk. After all, Shelley needed to stock up on copious amounts of drool-worthy imagery. How else was a single witch on house arrest supposed to while away the most romantic night of the year?
Prolonged sexual frustration had long since warped her brain, part of the reason she couldn’t tear her gaze from the delicious male specimen on the other side of her crumbling wall. As she watched the man execute a strict pull-up over his doorjamb, her lips tingled. She imagined trailing them over his lightly tanned chest, pictured herself tracing those rippling muscles with slow, sipping kisses.
Her tongue darted to wet the corner of her mouth as she envisioned sliding her hands under the waistband of his red workout shorts. She’d fuel his arousal with teasing strokes before catching the fabric between her teeth and yanking the garment off.
His body lowered, filling her magnified view with a visage stunning enough to choke off her next breath. Thick fringes of sooty lashes framed dreamy, moss-green eyes. His pale skin darkened to a rusty hue as he sped up the repetitions. Glistening with perspiration, midnight curls clung to his sharp, slanting cheekbones. An overlong forelock snaked down to graze his pronounced nasal bridge.
With his lips pursed and eyes narrowed, the intense, menacing expression he wore added fodder to her prolonged sexual fantasy. She could almost feel his coarse chest hair rasping her chin and cheeks, taste salt as she explored the expanse of taut, supple flesh. Her pulse raced, her erratic heartbeat a warm flurry over each fingertip.
As if by magic, his waistband slipped down his hips, sending his shorts pooling to his ankles before they dropped to the floor. Entranced by the unexpected striptease, her attention zeroed in on his penis. Even from afar, the warlock didn’t disappoint.
With a contented sigh, she imagined tracing the ridge, swirling her tongue over the long, thick shaft before taking the engorged tip into her mouth. While she contemplated the way he might taste, deep grooves formed between his thick brows. His full, sensuous lips flattened into a grim line.
She closed her eyes and ventured deeper into the familiar daydream, a moan catching in her throat as his erection slid back and forth over her flesh. Instead of the binocular’s cold metal chilling her hands, the toned, flexing ass she’d always admired warmed her palms and fingers. She took him deeper, until she could almost feel the head brushing the back of her throat. A hoarse, masculine groan echoed between her ears when she hollowed her cheeks and—
“Meow!” A quintet of sharp claws swiped down her calf, the sudden pain shattering her erotic fantasy.
Spinning around, she nudged at the brown, shorthaired cat with her toe. Her friend must really want attention if she’d resorted to shifting into her hated feline form. A familiar stockpiled more magic as animal than human, so the amount of time her companion spent coughing up fur balls around the house directly correlated with the accuracy of her premonitions.
For whatever reason, the witch preferred to keep the future at bay.
“Damn it, Sweets.” She tapped her foot on the diabolical cat’s head. “Scat. If you don’t stop bugging me, I’ll tell your boyfriend you’ve been gawking at another man on a daily basis.”
Arching her spine in a sinuous stretch, the feline stuck out her tongue.


About the Author
Globetrotter, lover of languages, and romance author, Tara Quan has an addiction for crafting tales with a pinch of spice and a smidgen of kink. Inspired by her travels, Tara enjoys tossing her kick-ass heroines and alpha males into exotic contemporary locales, paranormal worlds, and post-apocalyptic futures. Her characters, armed with magical powers or conventional weapons, are guaranteed a suspenseful and sensual ride, as well as their own happily ever after.