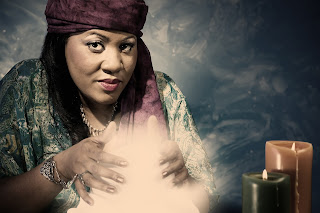 Few facts are actually known about the Voodoo Queen Marie Laveau. When I was doing my research fact often blurred with legend. Marie Laveau was born free in the French Quarter of New Orleans, Louisiana in 1801.

Folklore claims she had a snake named Zombi (after an African god), combined voodoo with Catholicism, and at one time worked as a hairdresser, but there is little evidence to support that. She had a daughter by the same name who also followed in her footsteps as a Voodoo priestess.

Both Marie Laveau and her daughter had a large following. They performed lavish ceremonies that drew a crowd of people from all walks of life white, mulatto, and black. Some attended because of mere curiosity as my heroine Violet does, and others truly believed in her power.

While she is minor character in my story it was fun bringing Marie Laveau to life. Since little is known about her I could create her how I wanted! 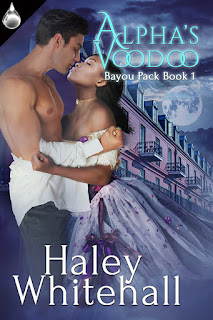 With her reputation in tatters, debutante Violet Creed is forced to exchange her life of luxury for one of uncertainty. Mark Afton wants nothing more than to take his rightful place as the leader of the Bayou Pack, but he needs a mate. Is Violet Mark’s destined mate, or is their attraction merely Voodoo magic? Haley Whitehall is pleased to present Alpha’s Voodoo, Book 1 of her hot, new, paranormal romance series, Bayou Pack.

Are curses real or merely imagined?

Violet Creed is a colored New Orleans debutante. She was brought up with servants and a strict set of rules regarding propriety, and her papa never approved of her interest in Voodoo. One night she sneaks out of the house and attends one of Marie Laveau’s gatherings—where she loses her virginity and her reputation. Turned out by her papa, Violet is destined for a life on the streets until Madam Dawn saves her.

Cursed to live as a wolf shifter, Mark Afton is a wealthy lawyer and heir to the Bayou Pack. Unfortunately, he can’t take over leadership from his uncle without a mate. Wanting to escape his mother’s endless matchmaking attempts, he accepts Madam Dawn’s invitation to sail on the maiden voyage of the Southern Rose and enjoy the pleasurable company of her ladies.

One of Madam Dawn’s recent hires catches his attention. He is drawn to Violet immediately. Could she be his mate or is their attraction merely Voodoo?

Violet struggled to straighten her dress as she ran. Her hair was a tangled mess of sloppy braids, twisted around her head like Medusa’s snakes. She wished she could stop and look at herself in the mirror to properly put her attire to rights, but at this late hour she couldn’t even see her reflection in a store window.

She knew it was dangerous to be out this late unaccompanied. Her pulse roared in her ears, and her shoes clipped on the sidewalk as she strode swiftly home. When she got closer to the Creed estate she slowed her steps, lest she make herself known. She slipped through the gate and hurried up the walk.

The soreness between her legs remained and she feared she looked as wanton as she felt. The night had not gone as she had planned. Well, all except for the sneaking out unnoticed part. The crowd that had gathered to listen to Marie Laveau speak stretched on as far as she could see. Yet, she did not get lost among the many white, brown and black faces. Somehow the Voodoo Queen’s magic had found her.

She swallowed hard, unable to get the picture of the man’s face out of her mind. The white man had seemed drawn to her. He’d kissed her and then as if by magic they couldn’t keep their hands off each other. Her conscience kept telling her it was wrong, but she couldn’t control herself.
Shaking her head, she forced that image to fall away, and continued toward the house. When she saw the lamp burning in the window her heart forgot how to beat.

Where to Find Haley Whitehall 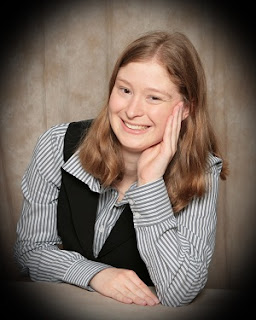 Haley Whitehall lives in Washington State where she enjoys all four seasons and the surrounding wildlife. She writes historical romance set in the 19th century U.S. When she is not researching or writing, she plays with her cats, watches the Western and History Channels, and goes antiquing. She is hoping to build a time machine so she can go in search of her prince charming. A good book, a cup of coffee, and a view of the mountains make her happy. 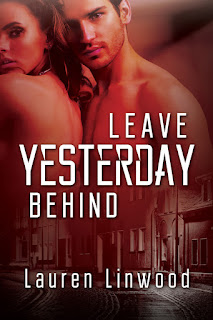 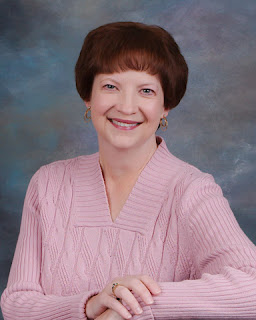 Please welcome Diane Saxon today as she shares with us her new story Banshee Seduction! 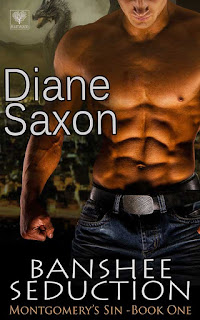 Sweet, shy librarian Ginny has a problem. Whenever passion strikes, so do the weeping, wailing voices in her head. Being half banshee, she’s already run screaming from the underworld and her female relatives, believing love will find a way with patience and faith on planet Earth.
The trouble is, humans just aren’t man enough, and every time Ginny shows interest in a male, she makes him bleed. It’s going to take more than just a simple human being to get past Ginny’s defenses.
Matthew, “The Dane,” fullback for the New York Chameleons, knows the moment he meets the little fireball that she’s his mate. For two hundred years he and his dragon have waited for a female capable of setting their world on fire. Problem is, he doesn’t seem to be able to stop her from going up in flames long enough to prove he’s more than man enough for her screaming banshee.
Will Matt ever be able to convince Ginny she’s his mate? And will Ginny get Matt alone long enough to let him appreciate her pyrotechnics?

He had no idea if he was going to survive. She drove him higher than he’d ever been before, and he’d only managed to get his hands on her and kiss her. The sweet smell of her skin, the soft touch of her fingers—umm, well—the yank of her fingers. Desperation was evident in every move she made, every sound she emitted from her perfect, plump lips.
He cruised his mouth back up the length of her neck, enjoying the heavy weight of her perfumed breasts in his hands. He sucked in the silken skin over the racing pulse at the base of her throat. His tongue smoothed over the flesh he held in his mouth. He felt the groan reverberate through her throat and flicked his thumb over her taut nipple.
“Oh, oh.”
With a sharp jerk, she wrenched her fingers from his hair and grasped his shoulders.
Thrilled at her response and keen that at last he seemed to be going to get the chance to explore his mate, he repeated the move with his thumb, stunned she hadn’t yet exploded into a profusion of fireworks.
The firm grasp of her fingers tightened on his shoulders like steel clamps. She might be a little thing, but she sure was undeniably strong. He nipped her neck in retribution. She flung back her head, making him flinch at the loud thunk as her skull connected with the heavy leather-bound books behind her.
“I’m coming!” she shrieked, almost exploding his eardrums.
He reared his head back and stared at her. “Already?”
Bright puce flooded her face, her lips parted, and a small keening wail escaped her. Wow, she really was responsive. Her lush breasts heaved beneath his hands, and the thrum of her pulse escalated to join the rhythm of his own heartbeat.
“No,” she gasped. “No…the door.”
She gave him a firm shove. Off balance, he reeled backward into the opposite shelf. His hand caught a row of books and sent them careering to the floor as his lunchtime leisure break took off in the opposite direction, tugging her clothes into place and screeching at whoever hammered on the front door.
“I’m coming. I’m coming!”
Her voice impatient, the fast clip of her heels echoed against the stone floor as Matt glanced at the fallen books scattered all around. He hunkered down and picked one up.
The Elusive Orgasm—Have You Got Her Coming or Going? 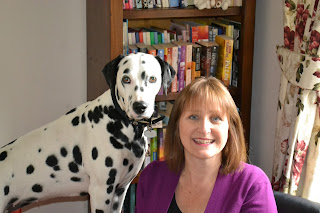 Where to Find Diane Saxon

I wish you all the best with your new book Diane. I love the cover!!