Please welcome fellow LSB Author Olivia Night talking about her new book, Seduction in Sierra Leone which is part of the Series, The Men of FTI.


I’m so happy that Layne graciously offered to host me today!  This whole “publishing a book” business is brand new to me and I am learning so much. There is a lot more involved in getting your book published than I ever imagined and at times it has been a bit overwhelming. However, persistence is something an author knows well.  I’ve realized that I can’t do it all at once and that this process really is a marathon and not a sprint.

I have been so lucky to work with Liquid Silver Publishing on my first book, Seduction in Sierra Leone. This is the first in a three book series. Books two and three are both close to complete.

The main characters of Seduction in Sierra Leone came to me on a random night in September when I was plagued with insomnia (as I often am).  Aislinn, (pronounced Ashling) and Brandt came to me already almost fully formed. All I had to do was write their story.

The writing process was so much fun. I don’t know how others write but, for me, I simply write what the characters tell me to. The story unfolds in bits and pieces and often not in chronological order. So for about six months I bounced around the book. It was not uncommon for me to sit and write a few pages in chapter three and then jump forward to chapter twelve to write a few pages.

Even more fun was the discovery of other characters. Two characters appeared at different times and very quickly they let me know that they had their own stories and their stories had to be told as well.

Each of the female lead characters has some part of my own personality. You will find that all of them mention Dean Winchester at one point or another (Can we say hottie?) and that they all are a bit stubborn.  Beyond that I will let you guess what other characteristics they share with me.

It’s been an incredible experience becoming a published author and I am looking forward to wherever this new road takes me. I hope you fall in love with my characters like I did! 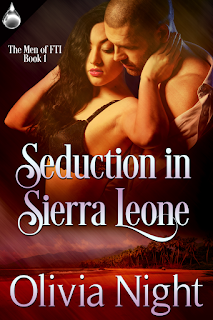 In the mangroves of Sierra Leone, two strangers raised a world apart find themselves inextricably connected. Seduction in Sierra Leone, the first in a series of three novels, is a fast-paced tale of murder, lust, and love that transports the reader to a foreign and mysterious world of danger.
Aislinn Salameh, an American relief worker, is searching for purpose in her self- imposed lonely world. The stranger who enters her village on a blistering hot day looks more animal than man. She knows she should stay far away but can’t stop herself from being drawn to the mysterious man.
Brandt Fairlane is a man haunted by the sins of his past. Detached from others, Brandt has spent his life alone. His line of work is too dangerous for the luxuries of love and family.
When Brandt sees Aislinn and her haunting eyes, he knows he must possess her. But when Brandt’s past comes back from the dead and Aislinn is caught in the crossfire, it is up to him to keep her safe. In order to survive, they must learn to rely on one another. As they run for their lives, the heat between them becomes undeniable. Now, Brandt must not only protect Aislinn from a madman committed to stealing her away but he also must protect her from himself. Because if Brandt steals her body and her heart, he’ll never let her go.

Excerpt from Seduction in Sierra Leone

The Men of FTI, Book One
Olivia Night

As he got closer to her, he realized there was something different about her eyes. He was a few feet away when he realized what it was. With the realization all oxygen left his body in a rush. It felt as if he had been punched in the gut. His heart stuttered. Shit, it did something weird at the sight of her. The woman’s eyes were...? He couldn’t think of word that would fit. And then it struck him. They were haunting, the color of a cucumber slice. Not the skin of the cucumber but inside. A pale, shivering light green. Her eyes widened as she realized he was looking at her. He could see, even from the distance, a small blush creeping up her cheeks at being caught staring. She was beautiful. All smooth pale skin and green eyes. He felt his dick jump. He almost looked down. It had been a long time since he had thought about his dick. And it was another man’s woman who was making him all too aware of it.
He felt heat course through him. Her tiny body had been placed purposefully behind the taller man. But Brandt could still make out her smooth legs and accommodating hips, accommodating as in she could spread those lush legs and accommodate his body between them. She was no doubt the man’s girlfriend, and here Brandt was thinking things that only a boyfriend should be allowed to think. Shocked at his own thoughts, he attempted to look away, but in the end, it was like pulling strips of Velcro away from each other. He wanted to close the distance between them, place his hands on the other man’s neck, twist, feel the snap, and watch the man drop to the ground. Then he would curl his fingers around the women’s neck, bring her to him, and angle her head so that he could kiss her. He shook his head like a man in a proverbial cartoon trying to expel the foreign thoughts and images. Envious. He was feeling envious of a man he didn’t know and a woman he had barely glimpsed. It was wholly inappropriate. He’d kill another man for thinking of his woman that way. Well, if he had a woman. Like the one he was staring at.
Fuck, he had to get a grip. For Christ’s sake, he was mooning over her like a teenage boy. Giving himself a mental ass-kicking, he averted his eyes and greeted Brima. He began to walk up the path to Brima’s home. But, as he walked, a magical sound floated over to his ears. She was laughing. His skin tingled at the musical note. His body tightened. Fury rose inside of him, a feeling he wasn’t expecting, a feeling that surprised him. She was laughing at the man who had been standing in front of her. Hatred for the unknown man charged through him like a herd of wild horses. Was he screwing her? His stance had been clear; it had said mine. Brandt wanted to eliminate the man, the threat. Bile rose at the idea of her lying beneath that man. Brandt realized he wasn’t envious. He was jealous. He had never been jealous. It was a useless emotion, and it got people killed in his line of work. If you wanted what someone else had, you simply took it. Jealousy could slow a man down. But he was. He was jealous. It screamed inside of him to move quickly, to take her from the man who was really just a baby. To make her his. To tie her to him in every way possible until she admitted that she was his. He wanted to mark her as his, use his teeth to mark her neck, her breasts, her stomach, the insides of her thighs. His. Fuck.
He had to stay far away from this woman. No woman needed a man like him. No woman deserved a man like him, one who would want to own her. He wasn’t one for laughter and cuddling. Puppy shit. Women wanted puppy shit. This woman, whoever she was, deserved more than Brandt could ever give. Brandt had to stay the fuck away from her. Because he didn’t give up what he made his.


Olivia Night, a fictional character herself, has always been an avid read and writer. She found the romance genre in college and has never been able to get enough. One sleepless night, the main characters of Book One in her Seduction series sprang from her head fully formed. They demanded she tell their story; so she did. As they revealed themselves, so did two other intriguing characters. Those characters convinced her to give them their own books because their stories were worth telling too. And so Olivia suddenly became a romance author. When Olivia is not writing, she has the best job in the world, which, too, will remain a secret. In her free time, she reads, write, runs, or is, most likely, out emulating Buffy the Vampire Slayer. Olivia lives in one of the most diverse and vibrant cities in the U.S.—Baltimore. She lives with her cat, which she is convinced was a gladiator in his past life. Olivia plans to continue being awesome at this thing called life. Really, that’s her only goal.