Lisa M Owens - If Only and What If

I am happy to have on my blog today Lisa M Owens giving us a snippet of her books, If Only and What If. 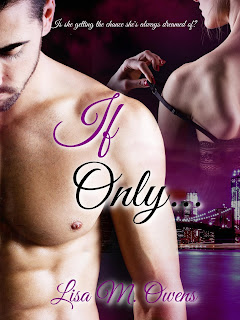 Blurb:
What would you do if you had the opportunity to go back and relive your greatest mistake?
Five years ago, Bree Sexton walked out on her fiancé and into the arms of a charming and handsome stranger. She has regretted her decision ever since. Instead of a fairy-tale marriage, her “prince” shattered her dreams and her spirit with physical violence and emotional cruelty she barely escaped.
She then mysteriously wakes up in bed with the fiancé she loved and left, the life she’d dreamed of now a reality, until her cruel ex-husband reappears to destroy her new life. But what is real, and what is make-believe? Is she really getting the chance she has always dreamed of? And when it is all said and done, will she finally end up with the man she has always regretted leaving? Or will she wake up to discover herself alone? 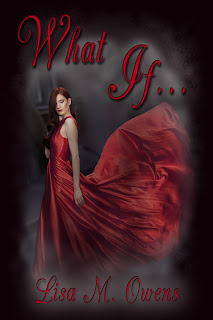 Blurb:
What would you do if you had the chance to go back and relive your greatest mistake?
When Maggie Ryerson was a teenager, she made a choice that changed her life forever. Once the stick turned blue, she found herself torn between two men: one was the friend who had comforted her when her world was suddenly turned upside-down and the other was the man she loved… and the father of her baby. Both men had feelings for her and both of them had offered to marry her.
She chose to marry for love.
Now faced with an unplanned pregnancy, a husband who can’t keep a job and a hormonal teenager, Maggie wonders what her life would have been like if she had married for money instead.
But like the saying goes, be careful what you wish for…
****
Excerpt from What If...
He tossed his jacket onto the library ladder and, walking up behind me, wrapped his arms around my waist. After lifting the thick tresses of my hair, he tenderly kissed the nape of my neck.
“You have the most delectable neck,” he said.
“Thank you.” My voice was slightly breathless at the erotic sensation of his lips raining gentle kisses along my sensitive skin.
After unbuttoning my blouse, his palm roamed underneath the fabric of my shirt, brushing against the small of my back. I couldn’t stop myself from sighing, the warmth from his hand sent shivers of sheer pleasure racing through my body.
“I love the way you look. I love the way you taste.”
He growled into my ear, and I moaned when he nipped at my earlobe.
God, he was driving me crazy.
I was on fire.
Yanking my aroused body against the hard planes of his chest, Carter shifted his position, shoving his hands inside my blouse, unfastening the clasps of my white cotton bra with his nimble fingers, my breasts spilled into his huge hands, and my bra fell to the floor.
“Would you like me to stop?” He removed my shirt in one swift motion and throwing it into the desk chair before rolling it out of our way.
His fingertips raked lightly across the darkened buds of my nipples, and I gasped out loud with pleasure, arching my back.
“I could let you get back to your reading.” He leaned forward to take another nibble of my earlobe. “I know how much you love reading in my library. In fact, I filled the shelves with you in mind.” Carter’s hot breath blew against my flushed skin.
I shivered, an involuntary response which couldn’t be controlled. I closed my eyes and groaned, hearing the sound of his deep masculine chuckle.
Two can play this game. I tilted my head back, resting it against the bulk of his shoulder. I began to shift my body provocatively, rubbing myself up against him, the rounded curve of my ass brushing seductively against his crotch. When he released a guttural groan, I smiled with satisfaction.
Carter whirled me around to face him, unbridled passion blazing in his eyes as he captured my mouth with his own. A fire raged through me, and I grabbed onto the collar of his shirt, bunching the material in my hands. I groaned into his opened mouth, clinging to him. Reluctantly, I released the hold on his collar and started unbuttoning it instead.
After ending the kiss, he grinned. “You greedy wench.” When he brought his wicked mouth down once again to worship my exposed breasts, I thought that I might die from the sheer pleasure of it. He unbuttoned my jeans, his hands reaching inside the denim and cupping the bare cheeks of my ass.
When I moaned, his fingers threaded through the belt loops of my Levis and shoved them down around my ankles. Stepping out of my jeans, I giggled when once again, his hands found my ass. Then he lightly smacked me, the brief stinging sensation on that particular part of my anatomy shocking me for a split second.
He had never spanked me before.
When he started exploring me with his fingers, I went weak. My legs buckled, and I squealed with surprise as Carter swept me up into his arms and carried me over to his desk.
I protested when he gently laid me down on the glass top. But he quickly silenced my concern with another kiss, a kiss which had my mind reeling and left me gasping for air. I released a groan of frustration when his mouth momentarily left mine.
He gave me the self-satisfied smile of a man who knew without a doubt that he had made me wet and wanting. “Would you like to see the rest of my library?”
“I would like to see something, but that’s not it,” I murmured with a suggestive wink, reaching for the fly of his slacks.
****
Buy What If…
http://www.amazon.com/gp/product/1517705142?keywords=what%20if...%20lisa%20m.%20owens&qid=1444422811&ref_=sr_1_1&sr=8-1
http://www.barnesandnoble.com/w/what-if-lisa-m-owens/1122766481?ean=2940152397307
https://www.smashwords.com/books/view/583137
****
Links to find Lisa
http://www.lmowens.co/
https://twitter.com/_lisamowens
https://www.facebook.com/pages/Lisa-M-Owens-Author-Page/401065116637549
http://www.goodreads.com/author/show/6884569.Lisa_M_Owens

Show original message
Posted by Unknown at 00:27 No comments:


I am so happy to welcome Carly Jordynn today. She has a new book out called Sasha Bishop Retired Slayer which you can take a sneak peak at and also she is sharing how she prepares and spends that most wonderful time of the year, Christmas!

It’s the Most Excellent Time of the Year

Yes, I am THAT person. I’m that annoying person who has the Christmas countdown from 99 days and down to THE DAY. I can’t help it, I love Christmas, the season, the meaning behind it, the food, the gifts, the sharing, and the laughter.

The season kicks in at Thanksgiving for me. Thanksgiving is a day to be grateful for all our blessings, families, and friends. The biggest shopping day of the year follows and then the Christmas season really gets going. There are parties to plan, food to prepare or buy if you are like me, and presents to shop for. I love finding that special gift that someone will just adore. I get excited seeing the joy on their faces. Don’t get me wrong . . . I love the getting part too it’s just that I enjoy the giving more.

Christmas is also a very stressful time of year for all the reasons listed above. There is an extra strain on finances. My day job has the end of the year crunch so tension mounts daily to get all the work done. To add even more worry, try being an author too. You have edits, blogs, writing, all in preparation for the next book release. Lastly, let’s not forget about all the added activities for the kids. By time New Year’s rolls around, I am ready for a mini-vacation.

By mid-January, I’m back on my regular schedule and energized for all the possibilities and opportunities the New Year has to offer. So, readers, I hope you have a joyous Christmas season with your family and friends. By the way, books make a great gift. Just saying. . . 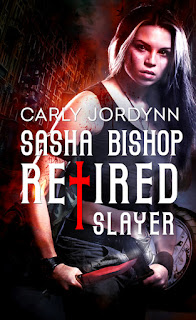 An impending war and ineffectual Slayer has seventeen-year-old Sasha, coming out of retirement. With her 167 year old vampire boyfriend, his great-great-grandson, her Watcher, and a select group of vamps, Sasha faces the monster behind the war, as well as, the battle for her heart.

Seventeen-year-old Sasha Bishop has done what no other Slayer has. She survived to the retirement age of seventeen. Now she gets to move to a new city, start a new school during her senior year, and she has to leave behind her 167 year old, semi-unofficial, undead boyfriend, Hutch aka Andrew Hutcherson.

At her new school, Sasha becomes friends with her handsome, motorcycle riding, neighbor, Dillon Hutcherson, who bares an uncanny resemblance to Hutch. Sasha digs into the mystery and finds that Hutch fathered a child before he was changed into a vampire in 1865. Further research reveals that Dillon is, in fact, Hutch’s great, great grandson. Now Sasha, with Dillon in tow, must return to her hometown and resume her past duties as the Slayer in order to quell a vampire uprising.

During the first battle, a quirk of fate has Dillon changing into a vampire. Only the quick action of Sasha’s Watcher, Branson Seyfried, saves the boy from becoming one of the undead. A transfusion consisting of Hutch’s vampire venom and Sasha’s slayer blood saves Dillon, but gives him the life of a Halfling. In addition, Hutch now has slayer blood and Sasha has vampire venom. The three are not only a danger to humans, but to vampire kind.

The impending war between human and vampire is nothing compared to the war within Sasha’s own heart as she battles her feelings for Hutch and his grandson. During the final battle, Sasha learns many family secrets, discovers her hearts true love, and 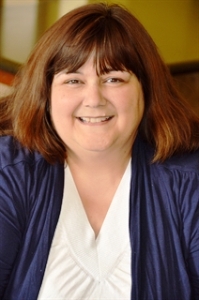 
Carly Jordynn is a writer from Northern Kentucky who loves to weave tales of fantasy, paranormal, and romance. When she isn’t writing a book, she writes lyrics for the Christian band, Phil Parks and One Step Closer.

Carly loves to travel. You can find her at various conferences and other author events throughout the year. Her hobbies include: travel, photography, reading, party-planning, dinner with friends, and hanging out with her family.

Carly Jordynn...writing YA and MG fiction