A Pantster, by Any Other Name.

Today I welcome Diane Saxon, who is sharing her new book with us.

A PANTSTER, BY ANY OTHER NAME

When I told friends and family that I had signed a contract for my first book, Loving Lydia, apart from the obvious congratulations, one of the most frequent questions they all want the answer to is: “Was it easy?” And I found myself saying yes.
Yes, because to me it had been easy. Easy, because I am a workaholic. Easy, because I did my research which took weeks.  I approached the publisher that I wanted to publish my books. I followed their submissions advice to the letter. Every single publisher has a different requirement and if I was too lazy to adhere to their requirements, why should they look at my manuscript?
Now essentially, I am from a business background, so, that is the part I understand and therefore, to me, it was easy.
But guess what? Before all of that, I actually wrote a book. With a storyline that I love and that I’m proud of.
Here comes the second most frequent question:
“Did you take lessons?”
“Huh?”
“Lessons?”
I didn’t know you were supposed to. I made a decision, I wrote a book.  And loved the process. Then I wrote another one, Bad Girl Bill which is also contracted and due for release later this summer.
And the lessons?  Well I consider that most of them come from years of reading. Hundreds of books in the genre that I love – Romance.  I remember the first one was read to me when I was ten, by my sister, Margaret. It was The Princess Bride. I’ve never stopped reading since.
When I wrote Loving Lydia, it took me two weeks. The skeleton of the book was formed. The storyline already existed, start to finish in my mind, and the characters were bursting forth. Then, I went back, and layered in the heart and the stomach, the veins and the pulses, the muscles and the skin.
And I chose the right publisher, Liquid Silver Books, and they chose me. They’ve given me great support.
My new book, Loving Lydia, was released on 3rd June, so here’s a little about it.
http://www.dianesaxon.com 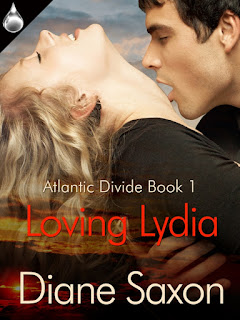 Hiding from the horrors of her past, the last thing quiet, shy Lydia thinks she needs is a persistent cowboy who not only wants to strip away her clothes but the layers of her secrets too. What Sam wants is more than just skin deep.
Little by little, as Lydia’s past starts to reveal itself, Sam sees a woman who has never been afraid, who was bold and adventurous, talented, and exciting.  As Sam discovers the truths Lydia has buried in her heart, her nightmares of the past become stronger and her fear of the future threatens to jeopardize everything.

“Mummy, Sam said he needs a good luck kiss so he doesn’t fall off the wild horse,” Rosie trilled, her eyes huge and full of appeal. “I gave him a kiss already, but he said he needed a kiss from a pretty lady to make sure his luck holds, seeing as it’s a big wild horse … and mean too.” She smiled proudly up at her mother. “I told him to come over and you would give him a kiss, ’cos you wouldn’t want him falling off that big, ugly thing.”
As Lydia’s startled, green eyes met his own, Sam moved in closer so that he stood between her legs. He placed his hands on the top of her thighs and grinned up at her.
Lydia flicked an anxious glance around the corral as the interest from the other ranch hands turned to them. If she didn’t give him a swift kiss, she was going to embarrass both herself and him.
He had her cornered, didn’t see that he had given her any option, and the thought had him grinning up at her as she cast her eyes around the corral.
He felt the heat of her thighs through her jeans as he gave a gentle squeeze to get her attention back.
“Hey, pretty lady.” He had to look up slightly at her as she perched on the fence. Her mouth was almost level with his nose. He tipped his head back and grinned some more, biting his tongue trying not to laugh at her wide, frantic eyes. “How about a good luck kiss for a brave soul?”
She held still so long that he wondered if she was going to make him look foolish. He could feel his smile waver as he held his breath and waited for her to make a move. If she would only dip her head and place her lips on his cheek, it would be a huge step forward and would save him a ribbing from the boys.
Lydia raised a hand and brushed a stray hair back from her face, and then brought the same hand down to rest on his cheek, bringing her other hand up to cradle his face. Christ, he had no idea she was actually going to touch him. Her cool fingers delicately rested on his face, and his pulse shot through the roof. His heart hammered in his chest as she took her own sweet time while she decided whether to kiss him or not. He’d thought it would be amusing to corner her, but it appeared she’d turned the tables on him now. She’d wiped the smile off his face as she studied his lips like it was a life or death situation. She stared at his mouth for so long that he shifted uncomfortably and moved in closer so that she didn’t have far to go.
It was just a kiss. A brief, innocent kiss.
For one split second he imagined a light of devilment glinted in her eyes as she touched her tongue to her bottom lip and almost made him beg.
Rosie clapped and Aaron stood quiet and serious as Lydia leaned toward him. Sam slowly closed his eyes, almost shuddering as her soft lips met his harder ones with a gentle pressure that she held for a moment, and that devil he suspected was inside her obviously became too much of a temptation.
Her lips parted and her cool, sweet tongue swept lightly across his closed lips.
His eyes shot open, and before she could draw in a breath, he snatched her off the fence and into his arms. His mouth, hot and hungry, captured hers as he allowed himself to indulge in a deep sensuous kiss, sweeping his own tongue into her mouth, tasting her. Slowly he pulled back before she had the opportunity to withdraw. Her eyes were still wide open, her breath shallow and quick, and he smiled as he let her body slide back down his until her feet touched the floor.
\