My special guest today is the lovely Rosanna Leo. She is a fellow LSB author and has some amazing stories out there. Today however she is going to tell us a little bit about her new book Predators' Kiss! 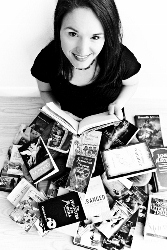 Thanks so much to Layne for allowing me to play here today!

You are most welcome Rosanna!

Now the setting poses a problem right away. You see, my heroine Lia is, uh, well…how shall I put it? She’s afraid of animals. And considering the main dude in the book is Ryland Snow, a rugged bear shifter, we have some conflict built in already.

Perhaps I took a perverse pleasure in placing Lia in the great outdoors. You see, I was never much of an outdoorsy girl myself. I went to Girl Guide camp and pretty much hated every moment of it, aside from the eating and the pranks. And now, I’m no different. If you give me the choice of camping in the bear-infested woods and staying at the Hilton, the Hilton would win every time.

Of course, I was never presented with an ornery, but rugged bear shifter like Ryland. He’s stubborn and suspicious and darkly mysterious…but the man is hot! Pretty soon, Lia begins to wonder if she should slap on the bug repellent for good and join Ryland in his woodsy haven.

I think, if I’d met him, I might do the same thing. I hope you get a chance to read Predator’s Kiss and I really hope you enjoy it! 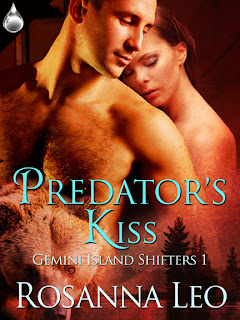 Blurb:
Bear shifter Ryland Snow just wants peace. The peace and quiet afforded him at his woodsy retreat, the Ursa Fishing Lodge. As owner of the lodge, Ryland enjoys the tranquil life he’s created among his fellow shifters. He lives to maintain a safe haven for them, away from meddlesome human eyes.
When his rock star brother arrives, bringing trouble in the form of a possible hitman, Ryland is incensed. He’s been cleaning up Soren’s messes as long as he can remember, and is tired of his brother’s lecherous exploits.
Things go from bad to worse when Lia Goodblood stumbles upon Ryland and his lodge. Yes, the reclusive erotica author is easy on the eyes, but the human woman is more trouble than she’s worth. To say nothing of her bizarre fear of furry creatures.
Ryland determines to rid himself of her presence. But when he learns she’s on the run from a crazed fan, Ryland’s protective bear instincts flare. And the bear won’t be denied.

Excerpt:
She was already reviving a few minutes later. Ryland let out a sigh of relief.
Thank God. When he’d first seen the petite woman hurtling through the trees, he’d worried someone was after her. But no one else had barreled behind her. And yet she’d seemed so scared.
They hadn’t helped, presenting her with a couple of snarling bears.
She moaned a little, and the soft sound warmed him, making him hard again. Damn. He glanced around the room, remembered he didn’t exactly tend to stash clothes in guest cabins, and raced for the bathroom. He grabbed a couple of clean towels off the rack and tossed one to Soren. “Cover yourself.”
Soren grinned like a devil and motioned to his nude bottom half. “I can conduct my flirting business much more efficiently this way.”
Ryland glared as he wrapped his lower half in the towel. “Cover yourself or I’ll strangle you with it, lover boy.”
His brother placed the woman’s backpack on the floor and threw the towel about his waist. “Such animosity is really not in keeping with your sainthood, Brother Ryland.”
Ryland ignored him and turned back to the woman. He didn’t know why it mattered so much she recover and feel comfortable in his presence, but it did. Of course, as owner of the lodge, it made sense he didn’t want to see anyone scared or hurt.
Yeah. That’s it. That’s all.
His rationalization did nothing to quell the nervous tremors in his gut, though. Or his excruciating hard-on.
Okay, she’s sorta pretty and has a body made for sin. So what? Get over yourself.
Clearly  it had been too long since he’d allowed himself to get lost in a woman’s body for more than a quick fuck. And this woman’s body deserved slow, leisurely loving. Greedy licks. Sensual tugs. Why, her breasts alone were so full and perfect, they just begged one to suck. To say nothing of those rounded hips and soft, womanly ass.
Ryland ran a hand over his face, feeling overly hot. Jesus Christ. Stop thinking like a horny teenager. You sound like Carter.
Besides, she was nothing like him. Human. And if time had taught him anything, it was the pursuit of romance with a nonshifter was a fool’s errand. She didn’t belong here on his resort, on his island. He needed to revive her and get her out of there.
Desperate to relieve the sudden, raging desire shooting up through his body, Ryland forced himself to look away from the woman. In doing so, he caught a glimpse of his brother. Soren was sitting next to her, his gaze contemplative, his eyes trained on her boobs. Ryland realized he didn’t like the way baby brother was looking at her. “Hey.”
Soren looked up. “What?”
“What are you staring at?”
Without batting an eye, Soren turned back to their unexpected guest. “Her. Can’t I stare?”
Ryland’s eyebrows shot up. “Staring at women has already gotten you into trouble. Maybe you should find a new hobby.” He stifled the low growl building in his throat. Now wasn’t the time for brawling, but he didn’t appreciate the way his brother gawked. His cool eye, appraising, as if he’d never seen anything like her before.
“You were checking her out too,” Soren replied.
“No, I wasn’t. I’m not interested in this … person,” Ryland retorted. As he uttered the words, he bit his tongue hard by mistake, as if confirming the words were a lie. “Damn,” he whispered, tasting blood.
“Do you think someone was chasing her?” Soren asked in a pensive tone, picking up one of his drumsticks and stroking it as if it were a lover’s finger.
“I don’t know.” Ryland sat on the other side of her small body and looked her up and down as she lay under the covers. Despite his mistrust of humans, he couldn’t help wondering who would frighten such a tiny, delicate thing. Had someone tried to hurt her? The very idea made him want to bash his head against the wall. Or better yet, bash any lowlife who dared to touch her.
No one touches her but me, his heart declared.
What?
As another stress headache shot through his brain, he wondered at the ferocity and lunacy of the feeling.