Introducing the lovely Lisa M Owens today talking about To Kiss Or Not To Kiss...

To Kiss Or Not To Kiss…
By Lisa M. Owens

I was a freshman in high school when I realized that people enjoyed reading my writing. It was your typical classroom assignment, writing about our funniest memory.
Only one person was supposed to read it and critique it, but mine was so funny that quickly, it was passed around through the entire class. Laughter burst out from each and every student that read it and even though I was mortified, somewhere deep inside I was pleased that something I had written could receive such a tremendous response.
Possibly right now you are wondering what the hell I had written about.
This is the story that my classmates found to be so funny.
Not naming any names, I was fourteen when I had my first “serious” boyfriend. He was an older man, fifteen years old and he was my first love. Of course, at this age neither one of us were driving, so our spending quality time together consisted of holding hands during school assemblies, eating lunch together in the school cafeteria and on the weekends, he would ride his bicycle clear across town to see me at my parents’ house.
It was on one of these occasions where my story really begins. He had come over to my house and we had spent the day together, under the watchful eyes of my parents, as well as my annoying little sister. While listening to music on my stereo, he held me in his arms and we slow-danced around my bedroom.
Then we decided to take a short walk outside. We didn’t walk far, just to the other side of the yard; we were still in clear view of my parents’ house. He had his arms around me and he had this look in his eyes that I had never seen before.
He slowly propelled his tall frame forward, pressing my back against the side of the outside laundry room. I inhaled and his hot breath fanned against the side of my face as his head slowly leaned down, my heart seeming to stop in my chest. This was to be my first kiss and I was so nervous that I feared he could feel my knees shaking.
Time seemed to stand still as I waited for his lips to brush against mine.
Right before our lips made contact; I thought I heard the sound of grass rustling. I looked up as though I were in a daze, not quite believing what I was seeing. My mother approaching us with a laundry basket overflowing with dirty clothes in her hands.
And she was mad.
I felt like screaming at the injustice of it all.
What was to have been my first kiss, interrupted.
Come to find out, my nine-year-old little sister had been watching out the living room window and she warned my mother what was going on. So here comes Mom, with a basketful of clothes, swooping in like the villain in a story.
That is what my classmates found so entertaining.
Even though I had started writing at the age of seven, that moment was the moment that made me start believing that perhaps I could actually be a writer instead of just dreaming about writing. It wasn’t just a pipe dream anymore.
It was a goal.

The writing bug bit Lisa M. Owens at an early age; she was writing short stories and poetry by the age of seven. At the age of eight, she entered a writing contest at her elementary school. About fifty books were written, but Lisa was one of the thirteen writers chosen who received a certificate and the chance to meet Oklahoma writer Sandy Miller.
A former victim of domestic violence herself, Lisa worked at the courthouse for over seven years. Almost three of those years she worked on the Marriage License/Protective Order desk. She helped women file protective orders and worked closely with the staff and counselors at DVIS.
Frustrated with books that merely gloss over the subject of domestic violence, Lisa wanted to write a book that told the entire story. Her dream is for her words to help give someone the courage to leave an abusive relationship.
She resides in Oklahoma and has two children. This is her first published novel, and she is currently working on the next novel of her If Only series.
Lisa enjoys hearing from her readers and can be reached at P.O. Box 9643, Tulsa, OK 74157-0643, or by e-mail, lisamowens@ymail.com. She can also be contacted on her website, www.lmowens.com. 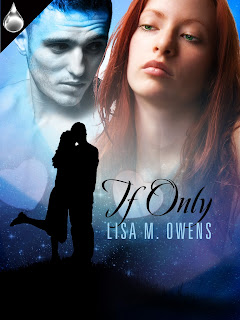 What would you do if you had the opportunity to go back and relive your greatest mistake?
Five years ago, Bree Sexton walked out on her fiancé and into the arms of a charming and handsome stranger. She has regretted her decision ever since. Instead of a fairy-tale marriage, her “prince” shattered her dreams and her spirit with physical violence and emotional cruelty she barely escaped.
She then mysteriously wakes up in bed with the fiancé she loved and left, the life she’d dreamed of now a reality, until her cruel ex-husband reappears to destroy her new life. But what is real, and what is make-believe? Is she really getting the chance she has always dreamed of? And when it is all said and done, will she finally end up with the man she has always regretted leaving? Or will she wake up to discover herself alone?

His dark head pressed against the flat plane of her abdomen, resting against her body. Then he began to rain soft kisses down the expanse of her bare stomach.
Scott had one hand caressing each of her thighs. He gazed up at her with a devilish glint in his brown eyes before he lowered his dark head to her triangle of curls. His tongue delved deep into her moistness, savoring the sweetness of her nectar. He began to suckle her, gently at first, weaving his tongue in and out of her body in a slow repetitive motion.
Bree groaned beneath him, writhing in agony at the erotic sensation of his tongue probing the deep core of her womanhood.
His wicked tongue then began to taste her sensitive flesh with an intense urgency, causing Bree to swear she could take no more of this exquisite torture.
Her slender legs wrapped around his chiseled frame, her body pressed tightly against his. She could feel his pulsating manhood straining against the material of his jeans.
Bree seemed to explode, her body shuddering its release. She could feel herself falling, her body spiraling out of control. “Scott, oh Scott!” she cried out as the spasms began to subside.
She looked up at her husband as she struggled to catch her breath, which was coming in short pants. Her green eyes were still glazed with passion when she gave him a wicked grin. She held up a single finger, gesturing for him to come to her. She reached for him, grabbing him by the neck and pulling his body against hers. She rolled over on top of him, laughing at the surprised look on his face.
“It’s your turn,” she murmured against his mouth as she covered his lips with hers. Her fingertips pressed roughly against the strained fabric of his jeans, fondling him gently. She wound her fingers through the denim loops, pulling the fabric down the long length of his muscular legs. Bree leaned over her husband’s toned physique, her mouth pressing against his throbbing manhood, dampening the material of his briefs. She grinned at the sound of Scott’s tortured groan. He reached for her, but she wasn’t going to let him off that easily. She intended to make him squirm.
Obviously, Scott had reached his limit. He grabbed her and pressed her to him, his tongue entwining with hers. Bree laughed into his open mouth as she reached for the waistband of his briefs and pulled them down.
“Open sesame,” he murmured with a mischievous grin as he cupped her thighs with his strong hands and spread her legs apart. She raised her hips to accommodate him, their bodies merging together as one. Her womanly core was moist and ready for him, and he guided himself into her gently.


Thank you so much Lisa for coming here today. To Kiss or Not to Kiss... That is the question!