Eva Lefoy is today sharing with us her new book Rescuing Kyle. 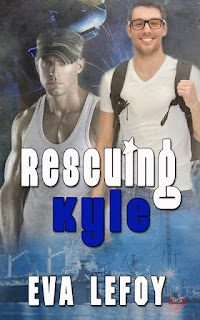 Soldiers who serve during action times can come home with plenty of scars – emotional, physical and mental – that keep them closed off from others. Geeks are by their very nature also reclusive. They are lost in their gadgets, working out new ideas, and fiddling and fixing, often alone. Both types are loners, for different reasons, but that makes it all the better when they come together!
In Rescuing Kyle, ex-soldier Derek really does rescue Kyle from a violent attack that Derek is in no way able to fight off. He simply doesn’t possess the know-how to defend himself. Probably if he read a book about it and practiced, he’d eventually figure it out! But Derek has more than enough muscle and mojo to get the job done. To Kyle, it’s as if the man has super powers.
So what does Kyle do for Derek? He’s a techie boy, a willing bottom and younger than Derek, which makes him less experienced. His last shot at bottoming was for the school football captain and the guy was NOTHING like Derek. Well… Kyle with all his gadgetry and computer knowledge knows how to get stuff done. Stuff that makes Derek’s head hurt just looking at the parts list. Plus, Kyle remembers how to have fun, something Derek has forgotten.
And what’s funner for two gay guys than a night of free porn?
*grins*

Check out Rescuing Kyle and find out what Derek and Kyle get up to in their spare time. The book is out now from MLR Press and part of their Memorial Day special releases. Enjoy!

One man's running for his life. His rescuer's fleeing from the past. When the two men collide, one will attempt to prove his worth and the other will try to hang onto his heart.

Kicked out of his dad's house for being gay, Kyle's running for his life. When he's rescued by hot ex-Army soldier Derek, he desires nothing more than a safe place to stayâ€”preferably in Derek's arms. But convincing Derek won't be easy as he has his own demons to fight. Haunted by memories of the war in Afghanistan, Derek's taken aback by Kyle's playfulness and obvious hero worship. Determined not to act on his attraction he resists, but even he can't withstand the sheer amount of fun one smart, sassy techie boy can bring.
Can one somber ex-soldier and one soda-fueled young genius find happiness down by the docks?

Derek’s scream jerked Kyle out of sleep. The raw sound of the pain went right through his bones, sharp as an axe. He bolted upright next to Derek, all at once scared and hyperaware.
Derek was breathing so hard he wheezed. Eyes wide, he stared off into space at the foot of the bed, his whole body trembling.
“Holy shit, dude.” He wanted to ask what was going on, but he had an inkling Derek was having a nightmare about the war. His expression was so torn that Kyle didn’t dare broach the subject, lest he cause more suffering. So he sat next to him, watching for a sign that Derek would be okay.
Eventually, Derek’s pants slowed, and his grip on the bedsheets loosened. He cleared his throat a couple of times and ground out a few hoarse words. “Sorry. I’ll be okay in a minute.”
Kyle didn’t know what to do. He’d never been around a man who’d served before, had no idea what he could do to help. So he waited, keeping an eye on the tension in Derek’s tight frame. When finally he slumped, putting his head on his knees, Kyle moved in. He wrapped an arm around him and placed his head on Derek’s shoulder. All he could offer was companionship to his misery, nothing more. But he could understand stark, gut-wrenching fear. That he knew all too well. As the silent minutes passed, the desire to comfort Derek grew. He tightened his hold. “It’s okay, man. You’re okay.”
Derek raised his head and let out a shaky exhale. “For a minute there, I was back in Afghanistan.”
The soft curve of his ear glowed downy soft in the early morning light. Kyle brushed his lips to it softly. “Shhh.”
He felt a shiver run through Derek, and the tenseness in him eased. Pleased, he gave the lobe a lick and caressed down the older man’s back, ending at his waist. Tugging him closer, he heard Derek’s relieved sigh and smiled. When Derek turned to meet his gaze, Kyle was ready. He met his lips, giving him a warm buss and then was quick to slip his tongue inside. Derek drew it into his mouth with a soft groan.
Wanting to show Derek he could take care of all his needs, Kyle folded Derek down onto the bed on his back. Their teeth clashed in a sloppy kiss before he got his bearings in the new position. Once he did, he lavished attention on Derek’s mouth and lined up their growing erections. Then he began to rub.

Eva Lefoy writes and reads all kinds of romance, and is a die-hard Trekkie. She’s also terribly addicted to chocolate, tea, and hiking. One of these days, she’ll figure out the meaning of life, quit her job, and go travel the galaxy. Until then, she’s writing down all her dirty thoughts for the sake of future explorers.

Thanks for telling us a little bit about your new book Eva, I wish you every success!